Imagine an infinite grid filled where each square is initially either black or white. On this grid is an ant, which can face either north, south, east or west. The ant moves over the grid according to the following rules: 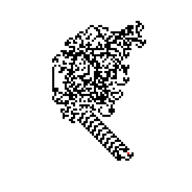 Running a computer simulation of this system, which was invented by Christopher Langton in 1986, shows that after a while the ant gets stuck in a cycle of 104 moves which move it two squares diagonally, after which point it continues building this diagonal “highway”. It is speculated that this will always occur (in which case we say that this sequence is an attractor for the system), regardless of the initial state of the grid, but so far no-one has been able to prove it (or the opposite).

The diagram to the left shows what happens with an initial white grid after 11,000 moves. The ant is the red pixel near the bottom right. Note the diagonal highway moving down and to the right.

In 2000 it was shown that Boolean circuits (AND, OR, NOT) could be created with the ant, and so the ant system is a universal computer or Turing machine.

Some interesting extensions can be made to this system. For example, more than two colors can be used, or more than one ant can be used (as long as there are rules for what happens when they collide). Rules can be added to make the ants reproduce. One of the simplest but most interesting changes is to give the ant a color, and have the rules of the system be extended to include changing the color of the ant, as well as being dependent on the color of the ant (e.g. we could have the turn rules behave as above if the ant is white but be reversed if the ant is black). Such ants that have state are called turmites, and can generate some very interesting patterns (originally these were named tur-mites by A.K. Dewdney but Rudy Rucker shortened the name and his version has stuck).

Further reading: Professor Stewart’s Cabinet of Mathematical Curiosities has a short chapter where I first learned about Langton’s Ant, and Stephen Wolfram discusses them briefly in a section on Turing machines in his opus A New Kind of Science.