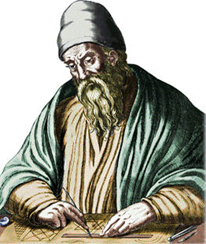 Number theory really began with Euclid, around 300BC, in books 7 through 9 of his masterwork, The Elements. It is here that we find the original definitions of odd and even numbers, prime and composite numbers, perfect numbers (numbers which are the sum of their factors, e.g. 6 = 3 + 2 + 1), and more. But the greatest achievements of all were his proofs that composite numbers are the products of primes, that this factorization is unique, and that there are an infinity of primes. Most introductory algebra or number theory classes cover these three great proofs, but they are worth revisiting for those who may have forgotten.

Before doing so, it is worth revisiting Euclid’s clever algorithm for calculating the greatest common divisor (GCD) of two numbers. We made use of this when solving the Monkey and Coconuts puzzle.

For another example, consider 77 and 65:

So the GCD is 1 and the numbers are coprime.

This sequence must terminate with a prime number in the last position before 1; if not, that is, if each successive number is still composite, then the series is infinite, but we cannot have an infinite series of decreasing whole numbers.

Proof of the Infinitude of the Primes

Further reading: William Dunham’s Journey through Genius: The Great Theorems of Mathematics has two chapters on Euclid’s elements and covers much of this material (although he omits the proofs apart from the last one). Proofs from THE BOOK has about six different proofs of the infinitude of the primes, each using a different branch of mathematics, from algebra to set theory to topology. To dust off my rusty memory of these proofs I had to pull out my well-thumbed college textbook Rings, Fields and Groups: An Introduction to Abstract Algebra, but while it is a great text I wouldn’t recommend it to those faint of heart!