Today is my last official day on the Live Search for Mobile team. I am moving over to a new team working on some incubating new mobile initiatives in emerging markets (as a South African ex-pat I can relate to this). It has been a fun ride and it is hard to let go of the Windows Mobile client which I think of as ‘my baby’ (with co-parent Ashley). There is still so much to do. However, some of the things that I have been trying to get shipped since September 2006 are finally going out the door in the upcoming release so I can feel that I have achieved at least some of what I set out to do.

I’ll continue blogging here of course, and I expect to blog quite a lot about the new release once it is out.

We started the WM client team in July 2006, after the MOJAX (mobile AJAX) project got killed. That left the core group - the Barrel of Monkeys - without a home. There were five of us - Steve (PM), Ashley and I (dev), John (test) and Danny (architect). Rather than each go off to different jobs we decided to try stick together, and managed to find a home in local search. We had three months to get the v1.0 product out, and it was a hit! We got an awful lot of fan mail from that (and if you were a sender, thanks! We’ve always appreciated the love :-) ).

After that the original monkey team gradually split up until only Ashley and I were left, but since December the team has been growing considerably in size and charter and there are lots of exciting things in store in the future for the product.

Back in September 2006 I added a couple of features that I thought were killer, but that never made it into the product. One of those was cell tower geolocation, which Google since did and which they got a lot of credit for (damn!). Another will be revealed soon and I’ve always been really excited about it; I’ll definitely blog about it the moment it ships publicly. I’m glad to be able to say that I’m leaving Live Search with all my pet features finally on a ship schedule (in fact I’ve offered that as my excuse for being able to leave).

Over the past 1.5 years through what is about to be our fourth release (almost unprecedented at Microsoft) I’ve had a lot of fun and worked with some great people. Live Search for Mobile, in the words of one of our users, “kicks serious ass”! My new group is almost a spin-off though, at least in terms of people, so it’ll be an easy adjustment. It will be nice to start with a blank slate again.

Thanks to everyone I’ve had the pleasure of working with - the Monkey’s, Don and Xuehai on the server team, our incredible tester and soon to be incredible mom Jenny, our chilled PM Gary, the rock stars over in the Speech Components Group, all our wonderful dogfooders and users, and all the new recruits. In particular working with Ashley has always been fantastic - we are almost of one mind - I’ll miss you bud. Remember the monkey. Aluta continua! 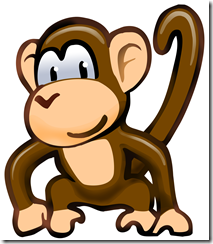