Hopefully by now you all have v3.0 of the Live Search client, and are enjoying the new features (web search, weather, and collections). I’d like to talk about collections in this post, but first it is worth mentioning a couple of changes in this version that are less obvious, and overcome limitations I have blogged about in the past:

Okay, on to GeoRSS. This was my pet feature that I originally built in September 2006 and it finally got shipped (and if you say ‘about time!’ then I have the names of the two people who kept trying to kill this to give to you; go blame them ;-)) 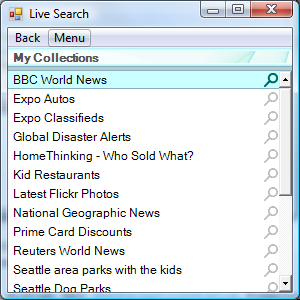 The Collections feature is built around Virtual Earth collections, to make it easier for people who don’t know/care about GeoRSS to use the feature and get some value out of it. For the more hard-core, you can enter GeoRSS URLs directly:

The actual collections/feeds are stored in the application directory in a file called feeds.xml. You may find it instructive to look at that file.

The cool thing about the URLs is that they can contain metatokens, which will expand to location-specific values: 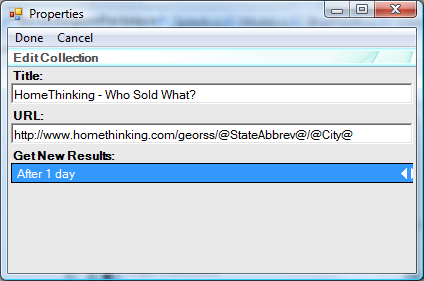 For example, the URL above:

has two such metatokens, namely @StateAbbrev@ and @City@. These will get converted into appropriate values based on your search location before the feed is fetched.

In a later post I’ll describe the GeoRSS schema that the client understands (it is a hybrid of GeoRSS, some Yahoo extensions, some KML and some OASIS xADR address stuff). For now I’ll just mention one interesting extension, namely pushpinurl, which can point to a .ico file. This file will be used as the pushpin icon on the map for that result. This can allow you to make custom pushpins.