My 5 year old daughter wanted to heat something up in the microwave. I suggested she use a minute, and she asked me how to enter that. I said enter 1, 0, 0, Start. “But when mom tells me to do a minute she says 6, 0, Start”, she responded. I wasn’t sure how to explain to her that 1:00 minute is the same as 60 seconds; microwaves are confusing enough to her as is.

So why are there are 60 seconds in a minute? Why not 100? The answer lies about 4000 years ago, in some of the earliest known mathematics, of Sumeria and Babylon. The Sumerians and later the Babylonians used a sexagesimal (base 60) number system for their astronomy (although they used decimals for day-to-day applications). They had no way to represent non-whole numbers other than as fractions, and 60 was a convenient base as it has a large number of factors; in particular it can represent 1/2, 1/3, 1/4, 1/5, and 1/6 all with whole numerators. In fact sexagesimal notation can be used to exactly represent any fraction in which the denominator has prime factors of 2, 3, and/or 5 (as these are the prime factors of 60), with a finite number of symbols.

Interestingly, both cultures did not have 60 distinct symbols but still used base 10 representation for numbers in the range 0..59, with narrow vertical wedges for 0..9 and thicker horizontal “corner” signs for 0..5 tens: 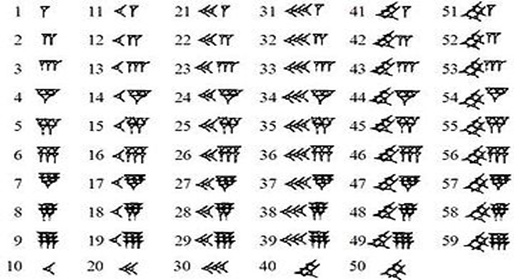 As there was no symbol for zero interpreting these numbers sometimes had to be done in context; often a space was used although various other symbols were introduced later, like slanting wedges. As far as we know these symbols didn’t represent “zero” as we understand it - that came later - but just represented a “void” position.

Sumeria was invaded by the Akkadians around 2350BC, who adopted the Sumerian system but introduced new symbols for hundreds and thousands.

This system was an improvement over the earlier Egyptian notation, which was base 10 but, apart from a few special cases, was limited to fractions with one as the numerator (i.e. reciprocals only).